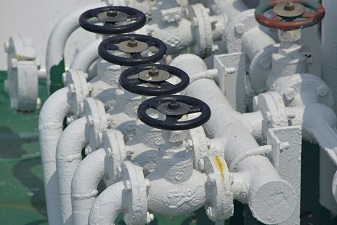 Due to frequent opening and closing and erosion of the fluid medium, the wear of sanitary valves is generally classified into the following types.

Adhesive wear is usually caused by sliding between metals. As the two pieces of metal are pressed together, the uneven surfaces come into contact with each other to form contact points. As they slide, the joints break to form new junctions that eventually form abrasive particles. The wear of materials will increase the dimensional tolerance of parts, which will result in leakage and damage to the valve closing mechanism. Moreover, the debris, especially large particles formed by abrasion or adhesion, will jam the moving parts of the valve and disable it.

Abrasive wear occurs when hard particles cut materials under load. Hard particles such as sand, alumina, carbides, etc. press the surface of the soft metal under normal loading, and a trench will be drawn to form metal detritus or orange-thinning debris when sliding. Erosion wear is a special form of abrasive wear caused by the cutting action of particles suspended in the fluid under the action of kinetic energy. It will occur on valves used to feed ancient solids, such as closed funnel valves used to transport mud or in blast furnace feed systems.

If the worn surface is subjected to chemical corrosion, corrosion wear will occur. Most corrosion-resistant alloys initially form a protective layer of solid chemical corrosion, which may be worn away as the surface slides, and the metal exposure to surrounding corrosive media increases wear rates.

The phenomenon of surface fatigue wear can be observed when closed track is sliding or rolling repeatedly. Because the cracks on the part’s surface or surface-f expand under repeated cyclic stress, fatigue wears usually forms a pit on the surface. Surface fatigue wears generally occur in rolling elements such as bearings, gears, and other parts.

Besides the above wear types, there are some special wear types such as fretting wear, corrosion, and cavitation.

Fretting wear is caused by the vibration of tiny tangents that produce oxide wear debris, so the oxide causes further wear just like an abrasive grain.

Cavitation occurs when a sudden change in pressure causes the liquid to drag within. It appears on the hydrofoil, steam valves, and steam transparency parity. The mechanical impact of the bubble’s collapse causes holes to form on the metal surface, and this wear is usually avoided by properly designing the valve to minimize pressure drop. Steam globe valves are usually prone to this abrasion. Although the design is unavoidable and some cobalt-base gold can be used as part material to reduce steam corrosion, the cost of the valve has increased.

There are different types of wear, and some engineers may induce wear purposely for varying reasons.

Thank you for reading our article and we hope it can help you better understand the 7 types of wear produced during valve operation. If you want to learn more about sanitary valves, we would like to advise you to visit Adamant Valve homepage for more information.

How to Maintain a Sanitary Butterfly Valve?
The Proper Ways to Clean the Filth of Hydraulic Valve
Features of the Valve Manufacturing Process
The Problem of High Noise Level of Valves