The Classifications of Check Valves 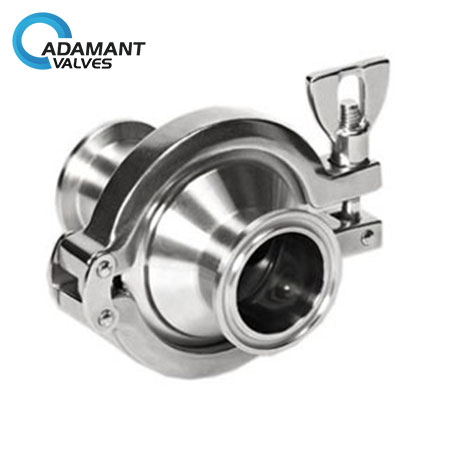 1. Swing check valve
The valve flap of swing check valve is disc-shaped and rotates around the axis of valve seat channel. As the channel inside the valve is streamlined and the flow resistance is smaller than that of the lift check valve, it is suitable for low flow rate occasions or large caliber occasion where the flow doesn’t frequently change, but it’s not suitable for use in pulsating flow. Its sealing performance is not as good as that of the lift check valve. Swing check valve can be divided into single-flap, double-flap and multi-flap types. These three types are defined according to the caliber of the valve. The purpose is to weaken the hydraulic shock when the medium stops flowing or backflows.

3. Disc check valve
Its valve flap rotates around the axis inside the valve seat. Disc check valve has a simple structure, can only be installed on horizontal pipelines. Its sealing performance is poor.

4. Pipeline check valve
Its valve flap slides along the centerline of the valve body. It is a new type of valve. Its size is small, weight is light, processing technique is good. It is one of the development directions of sanitary check valve. But its fluid resistance coefficient is slightly larger than that of the swing check valve.

5. Pressed check valve
This kind of valve is used to feed water for boilers and cut off the steam. It has combined functions of lift check valve, shut-off valve and angle valve.

Besides, there are other types of check valves that are not suitable for pump outlet installation, such as bottom valves, spring-type and Y-type check valves.

How to select a suitable sanitary check valve?
The Use and Features of Ball Check Valve
Ideal Solution to Sanitary Check Valves in the United States
What is the Difference Between a Check Valve and a Non-return Valve?