The Structural Types of Ball Valve 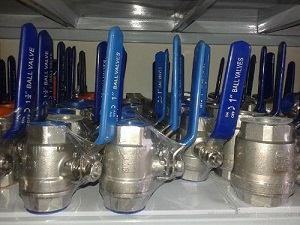 According to its structural type, the ball valve can be divided into a floating ball valve, fixed ball valve, and elastic ball valve.

The ball of sanitary ball valve is floating. Under medium pressure, the ball can have certain displacement and push tightly against the sealing surface of the outlet, ensuring the sealing at the outlet.

The floating ball valve has a simple structure and good sealing performance. But the load of the working medium sustained by the ball is all transferred to the outlet sealing ring. Therefore, we need to take into consideration whether the sealing ring materials can withstand the working load of the ball medium. This structure is widely used in medium- and low-pressure ball valves.

The ball of the ball valve is fixed, and won’t move under pressure. Fixed ball valves all have floating valve seats. Under the pressure of the medium, the valve seat moves, pushing the sealing ring tightly against the ball to ensure sealing. Usually, bearings are installed on the upper and lower shafts of the ball. Their operating torque is small. They are suitable for high pressure and large diameter valves.

In order to reduce the operating torque of the ball valve and increase the reliability of the sealing, oil sealing ball valves have appeared in recent years.

Special lubricant is injected in between the sealing surfaces to form a layer of oil film, which enhances the sealing and reduces the operating torque. They are more suitable for high-pressure large diameter ball valves.

The ball of the ball valve is elastic. The ball and the sealing ring of the valve seat are both made of metal materials. The sealing ratio is very large. Relying on the pressure of the medium itself is already unable to meet the requirements of the sealing, so external forces must be applied. This type of valve is suitable for high-temperature and high-pressure mediums.

An elastic ball obtains its elasticity by having the lower part of the inner wall of it grooved. When closing the channel, use the wedge-shaped head of the valve stem to make the ball expand and press tightly against the valve seat to achieve sealing.

Loosen the wedge-shaped head before turning the ball, and the ball then restores its original shape. This results in a very small gap between the ball and valve seat, which can reduce the friction of the sealing surface and operating torque.

According to the channel position, the ball valve can be divided into straight-through type, three-way type, and right angle type. The latter two types are used to distribute the medium and change the flow direction of the medium.